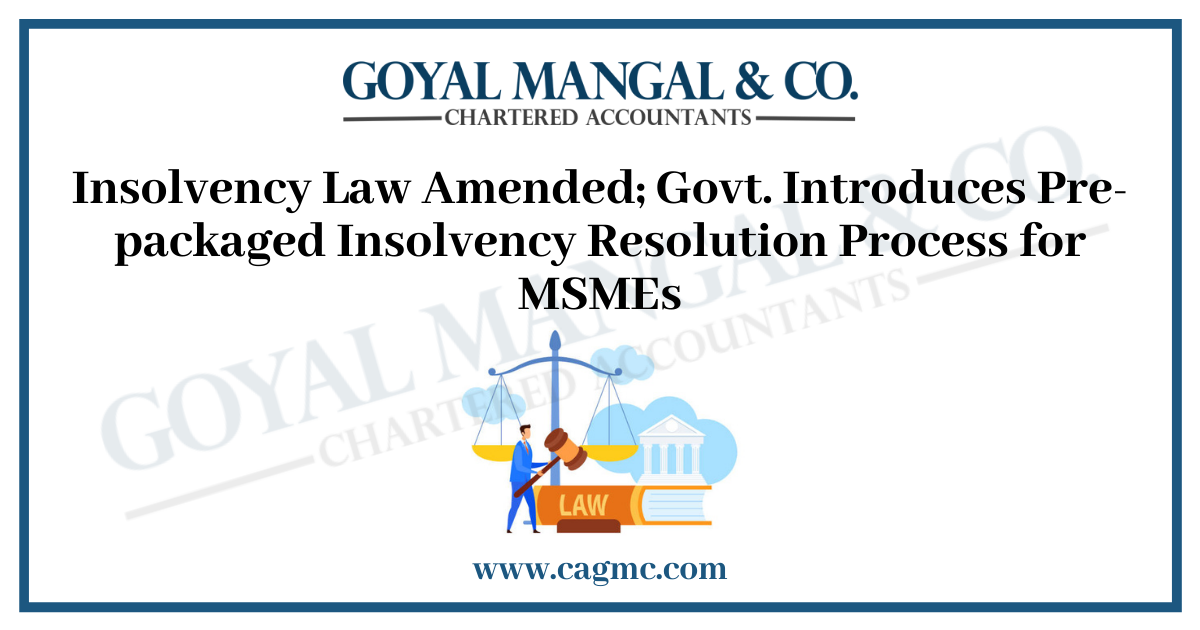 On 4th April 2021, the Centre issued an ordinance to introduce pre-packaged insolvency for corporates classified as MSMEs. The Pre-Package Insolvency Resolution Process is aimed at reviving MSMEs by submitting Base Resolution Plan along with the other data by the MSME itself.

Since MSMEs are pretty critical for the economy of India, the government considered it a right fit to first introduce pre-packs for MSMEs. Besides offering employment to the country’s sizeable population, MSMEs contribute hugely to India’s GDP (Gross Domestic Product).

Moreover, during the current pandemic, the MSME in India has suffered the most than others. In fact, with the threshold of a debt default at ₹ 1 crore now under IBC, maximum MSMEs are out of this scope. In the upcoming days, the Centre is supposed to notify the debt default threshold for MSMEs for which the pre-packs could be used.

This ordinance is supposed to offer relief and a new lease to the companies whose fate was earlier dependent upon various debt restructuring schemes in the past.

Currently, there are about 6-7 lakh companies in India that fall under the category of MSMEs (Micro, Small and Medium Enterprises). Potentially, many of these companies could avail benefits from the newly introduced pre-packaged insolvency framework.

But before we dig deeper into that actual ordinance, it’s important to understand- what is the Pre-Packaged Insolvency resolution process and what are its general characteristics?

So, without any further ado, let’s get started-

What is the Pre-Packaged Insolvency Resolution Process?

In the Indian context, the Pre-packaged insolvency resolution process (also known as PPIRP), is a substitute to the Corporate Insolvency Resolution Process (CIRP), prescribed by Insolvency and Bankruptcy Code, 2016.

Technically, it’s a process where the business resolution is negotiated with a buyer before the appointment of an insolvency professional.

In other terms, pre-packs are an amalgamation of formal and informal mechanisms where the informal process extends to NCLT admission.

As specified under the Insolvency and Bankruptcy Code (IBC), the NCLT admission is followed by the existing NCLT supervised process for resolution.

One of the significant aspects of current pre-packs is that it is significantly inexpensive and less time-consuming as compared to the formal insolvency proceedings.

A General Pre-packaged insolvency resolution process has the following characteristics:

Highlights of the Pre-Pack Ordinance

Following are the highlights of the newly introduced ordinance:

To know the Pre-pack process, first, have a look at the eligibility criteria of the entities entitled to file an application for PPIRP:

Pre-requisites for Filing Application for PPIRP

Only Micro, Small and Medium Enterprises are eligible for the PPIRP.

Eligibility of Corporate Debtors (MSMEs) to Initiate the PPIRP

Entities Not Entitled to File an Application

The following entities aren’t eligible to make an application to initiate PPIRP:

Have a look at the Pre-packaged Insolvency Resolution Process of MSMEs:

A resolution plan must offer the measures, as may be required, for maximising its assets’ value. It must contain the mandatory contents of the plan.

The applicant needs to submit the resolution plan/(s) in accordance with the Code and these Regulations to the Resolution Professional electronically within the stipulated time provided in the invitation for the plan.

A resolution plan not complying with the provisions of sub-regulation (1) shall be rejected.

The resolution plans received under regulation 46 complying with the requirement of the code and these regulations, shall be assessed on the basis for evaluation.

Step 5: Application to the Adjudicating Authority

A Debtor in Possession Model

The framework in the process is kind of an experiment and differs in some ways from the regular CIRP.

In simpler terms, the current Pre-packs will allow the debtor to continue to control and operate the enterprise until resolution takes place.

In an interview, Chairperson, Insolvency and Bankruptcy Board of India (IBBI), M.S. Sahoo said-

“The objective of introducing pre-packs for MSMEs is to quicken the process for MSMEs’ resolution and it’s a cost-effective mechanism. The pre-pack for MSMEs depends on the debtor in possession model, unlike the regular CIRP where RP is in possession. This is supposed to offer various flexibilities to existing promoters of MSMEs.”

“The government has currently restricted Pre-packs provisions for MSMEs and in some time, it will extend it to other corporations as well. It will aid Corporate Debtors to enter into consensual restructuring with lenders and address the company’s liability side. The government has to further augment the NCLT’s infra so that Pre-packs can be employed in a time-bound manner. The government must also consider establishing certain benches looking at Pre-Pack and Insolvency above a certain size to promote resolution of large cases within a stipulated timeframe.”

“As with any legislation, this Ordinance is also ought to emerge, because it goes along to address implementation troubles which will arise. Illustratively, the payment/ restructuring terms to dissenting creditors may have to be handled soon, particularly in light of the recent Supreme Court judgement.”

Clearly, the Pre-packaged insolvency resolution process for MSME has led to a drastic turnaround in the corporate distress resolution framework of India. It has completely fortified the Indian Insolvency Resolution Framework.

While the Pre-pack process is currently restricted to MSMEs, the government is planning to roll it out for other corporates as well. Moreover, while drafting the Pre-pack scheme for other organizations, the success and the failures of the MSME Pre-pack should be considered.

Pre-packs pre-supposes co-operation among distinct classes of creditors and debtors to work efficiently. The success of Pre Packs is directly correlated to the role played by the participants of the process- Financial Creditor, Adjudicating Authority, Management, and Resolution Professional.

Rest, we need to wait and watch what good this ordinance will really do. Will it really achieve its objective? We hope it does.

Until then, stay tuned with us!