The Goods and Service tax was recommended to be introduced in the year 2004 by the Prime Minister of India to replace the existing Central Level VAT and state-level VAT tax system, and finally the action of switching the tax system of the country to GST was done in the year 2017 after generating a detail structural bill as a reformation. Since independence GST has been the largest indirect tax reform in India. The system of GST will include a tax that will be levied on the supply chain of goods and services and currently the GST is levied by the Central which is called the Central GST (CGST) and the State which is called the State GST (SGST). This means that from the manufacturing or import of the goods to the last retail sales the tax will be levied on each stage of the supply chain. With the implementation of GST, all other indirect taxes will be removed except custom duty and only GST will have to be paid.

GST came into effect on 1st July, 2017 by replacing all the previous indirect taxes as prevailing at that time such as VAT, Excise Duty, octroi duty etc. The implementation of GST has always been a big topic of discussion.

The introduction of GST by the government of India was a huge step taken in the field of indirect tax reforms. This new taxation system will be extremely fruitful to both the government and economy of the country as it will mitigate the bad effects of cascading and reduce the problem of double taxation. It will also make a huge impact on the consumer by reducing the overall tax burden on goods, which used to be as high as 25%-30%.

GST is taking new shapes by implementing new changes by introducing new notifications, circulars and orders. It is very necessary for the individuals and corporate to abide with all the rules and regulations.

Therefore, the entire system of GST is to be sustained by an IT system, so that it can provide both front end services and back end IT services as well, only for states who opted for this.

GST is an extremely new concept for the country and needs a lot of time and knowledge to understand and adapt it, for its optimum application in the Indian economy. For the better implication of GST and efficient use of the reform by every small and large business, there are GST Advisory services given to a business who require addition understanding on the working of GST, these services are provided by various consulting companies and highly educated professional of taxation law, to whoever requires advice on this tax reform.

Therefore, in today’s economy, every blooming and successful business needs to know the front to the back of GST and its working, and GST advisors are a vital part of majority businesses as the provide knowledge for in-depth functioning of the GST norms and regulations and keep their client’s updated. They analyze every impact GST has on the client’s business, customers, goods, and other such external and internal forces so that their business can function at maximum effectiveness and efficiency.

GST Advisory is the way to get a deeper focus on your tax performance, by looking at the company’s historical performance and finding out the potential of the tax department of the business. This helps generate better opportunities for the company to increase its potential sales and profit by standardizing the company’s current performance and then developing a new and modified strategic approach to taxation, which will hence lead to an increase in the company’s overall performance as well as shareholder value.
In this era of dynamic change, it is not possible for the individuals, corporate, and multinational companies to keep a regular eye on such changes and here comes the need of an expert professional firm where you can rely and for consultation, advisory and filing of day to day returns.

We provide the consultancy related to the following:

Our expert team closely reviews all the details minutely and provides the best consultancy. 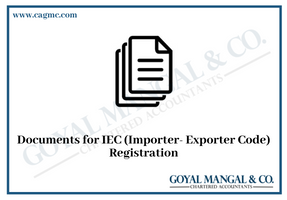 All the business minds have inner desire to take their goods at international level. Their desire 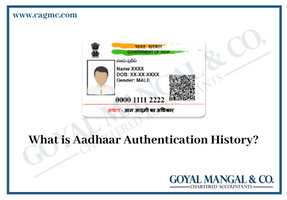 What is Aadhaar Authentication History?

One of the most relevant pieces of documentation used as identity evidence is the Aadhaar card, which

How to Surrender an Importer – Exporter Code?

Every business has a goal to make their product a global. No export or import is 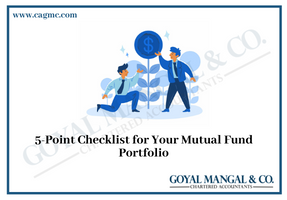 New beginnings are always great as you can bring changes to your existing plans. Well, this